Mr.Willowby's Christmas Tree
by Robert Barry
Christmas is here and Mr. Willowby's tree has arrived. There's just one big problem: The tree is too tall for his parlor! He cuts off the top so it will fit, and soon the top of that tree is passed along again and again to bring holiday cheer to all the animals in the forest.
Kids will love watching the tree move from home to home, and families will appreciate the subtle message of conservation and recycling, as the tree top spreads joy to all.
This heartwarming story is the perfect way to start the yuletide season, and a warm addition to any family's festive holiday traditions.

How Murray Saved Christmas
by Mike Reiss
Illustrations by David  Catrow
A hilarious Christmas story from an Emmy award-winning writer of The Simpsons!
When Santa’s knocked out cold by a Jack-in-the-Boxer’s walloping punch, deli owner Murray Kleiner reluctantly agrees to take his place. The suit doesn’t fit, Murray smells a bit like pickles, and there’s no way he can remember the names of all those reindeer. But with the help of a pushy elf and an eager-to-believe young boy, Murray finds out that even though he’s not big enough to fill Santa’s suit, he’s got more than enough heart to get the job done.

The Boy who Harnessed the Wind
by William Kamkwamba and Bryan Mealer
Illustrations by  Elizabeth Zunon
When fourteen-year-old William Kamkwamba's Malawi village was hit by a drought, everyone's crops began to fail. Without enough money for food, let alone school, William spent his days in the library . . . and figured out how to bring electricity to his village. Persevering against the odds, William built a functioning windmill out of junkyard scraps, and thus became the local hero who harnessed the wind.
Lyrically told and gloriously illustrated, this story will inspire many as it shows how - even in the worst of times - a great idea and a lot of hard work can still rock the world.
Here are a few Christmas books for adults.
Skipping Christmas
by John Grisham
Imagine a year without Christmas. No crowded malls, no corny office parties, no fruitcakes, no unwanted presents. That’s just what Luther and Nora Krank have in mind when they decide that, just this once, they’ll skip the holiday altogether. Theirs will be the only house on Hemlock Street without a rooftop Frosty, they won’t be hosting their annual Christmas Eve bash, they aren’t even going to have a tree. They won’t need one, because come December 25 they’re setting sail on a Caribbean cruise. But as this weary couple is about to discover, skipping Christmas brings enormous consequences—and isn’t half as easy as they’d imagined.
A classic tale for modern times, Skipping Christmas offers a hilarious look at the chaos and frenzy that have become part of our holiday tradition.

The Penguin Book of Christmas Stories
Collected by Jessica Harrison
The perfect gift this Christmas season: a generous selection of some of the greatest festive stories of all time - now in a beautiful clothbound edition.
This is a collection of the most magical, moving, chilling and surprising Christmas stories from around the world, taking us from frozen Nordic woods to glittering Paris, a New York speakeasy to an English country house, bustling Lagos to midnight mass in Rio, and even outer space.
Here are classic tales from writers including Truman Capote, Shirley Jackson, Dylan Thomas, Saki and Chekhov, as well as little-known treasures such as Italo Calvino's wry sideways look at Christmas consumerism, Wolfdietrich Schnurre's story of festive ingenuity in Berlin, Selma Lagerlof's enchanted forest in Sweden, and Irène Nemerovsky's dark family portrait. Featuring santas, ghosts, trolls, unexpected guests, curmudgeons and miracles, here is Christmas as imagined by some of the greatest short story writers of all time.

A Surprise for Christmas
Collected by Martin Edwards
Two dead bodies and a Christmas stocking weaponised. A Postman murdered delivering cards on Christmas morning. A Christmas tree growing over a forgotten homicide. It's the most wonderful time of the year, except for the victims of these shocking and often elaborate murders. When there's magic in the air, sometimes even the facts don't quite add up and the impossible can happen -- and it's up to the detective's trained eye to unwrap the clues and put together an explanation neatly tied up with a bow. Martin Edwards compiles an anthology filled with tales of seasonal suspense where the snow runs red, perfect to be shared between super-sleuths by the fire on a cold winter's night.

Red and Lulu by Matt Tavares
Red and Lulu make their nest in a particularly beautiful evergreen tree. It shades them in the hot months and keeps them cozy in the cold months, and once a year the people who live nearby string lights on their tree and sing a special song: O Christmas Tree, O Christmas Tree. But one day, something unthinkable happens, and Red and Lulu are separated. It will take a miracle for them to find each other again. Luckily, it’s just the season for miracles. . . . From Matt Tavares comes a heart-tugging story combining the cheer of Christmas, the magic of New York City, and the real meaning of the holiday season: how important it is to be surrounded by love.

Let it Snow by Holly Hobbie
How do you find the best Christmas present ever for your best friend in the whole wide world? That's what Toot is trying to find out, and Puddle is having just as much trouble. With a nod to previous books in the bestselling Toot & Puddle series, Holly Hobbie shows readers that the best kind of present for the best kind of friend is one that shows just how much you care.
The Christmas Train by David Baldacci
Disillusioned journalist Tom Langdon must get from Washington to LA in time for Christmas. Forced to take the train across the country because of a slight 'misunderstanding' at airport security, he begins a journey of self-discovery and rude awakenings, mysterious goings-on and thrilling adventures, screwball escapades and holiday magic.

He has no idea that the locomotives pulling him across America will actually take him into the rugged terrain of his own heart, where he will rediscover people's essential goodness and someone very special he believed he had lost.

Tru & Nelle by G. Neri
Long before they became famous writers, Truman Capote (In Cold Blood) and Harper Lee (To Kill a Mockingbird) were childhood friends in Monroeville, Alabama. This fictionalized account of their time together opens at the beginning of the Great Depression, when they're both still young. They love playing pirates, but they like playing Sherlock and Watson–style detectives even more. It’s their pursuit of a case of drugstore theft that lands the daring duo in real trouble. Humor and heartache intermingle in this lively look at two budding writers in the 1930s South.

A Children's Literary Christmas: An Anthology   from the British Library
Immerse yourself in festive magic with this brand-new collection of the finest Christmas stories and poetry for children from some of the greatest writers in the English language. Inspired by the approach and style of A Literary Christmas, this carefully chosen anthology celebrates the wonders of the Christmas season, following the escapades of Santa Claus and adventures of the frost fairies. Divided into five sections, this anthology of historical and modern stories covers festive traditions, fairytales, gift-giving, and family fun. Timeless favorites from Charles Dickens, Clement C. Moore, and Louisa May Alcott are presented alongside award-winning and contemporary voices, such as Matt Haig, Swapna Haddow, and Shirley Hughes. This treasure trove of extracts is beautifully presented with illustrations from the collections of the Library as well as a few pieces of original artwork. 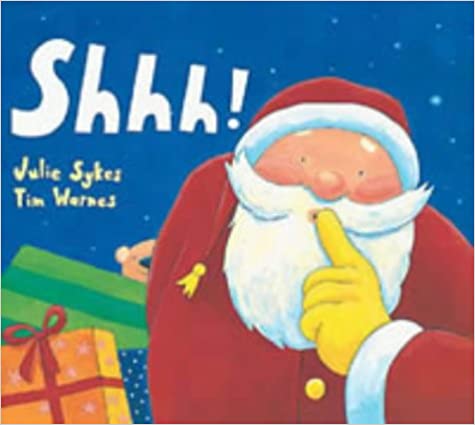 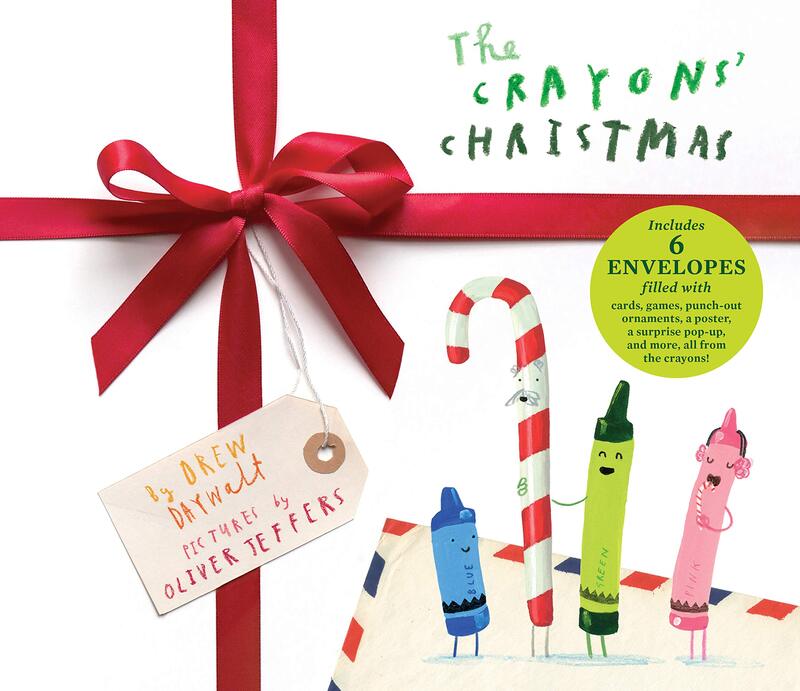 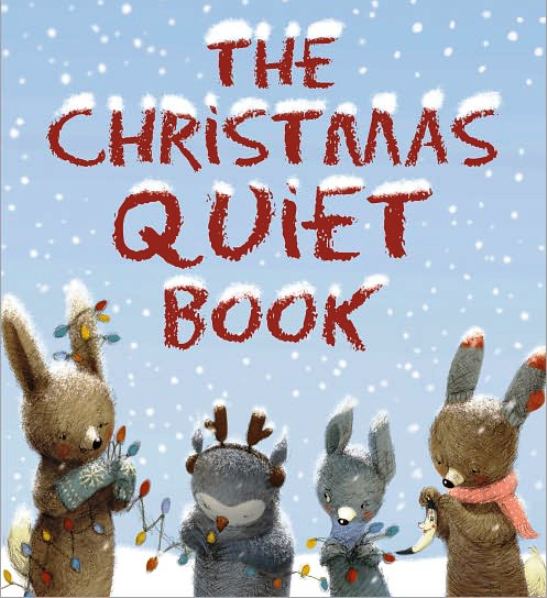 Shhh! By Julia Sykes
Its Christmas Eve and Santa's favourite time of year. He sings and laughs noisily, as he delivers his presents. Will his high spirits waken the children before Christmas morning?

The Crayons’ Christmas by Drew Daywalt
'Tis the season for all of us to write our holiday wishlists. But everyone--even the crayons--know the best presents are the ones that you give. In this unique book, readers get to see how Duncan, the crayons, and their families celebrate the holidays. With real, folded letters from the Crayons that you can pull from their envelopes and read, games, punch-out ornaments, a poster, and a pop-up tree.

The Christmas Quiet Book by Deborah Underwood
The holidays are filled with joyful noise. But Christmas is sometimes wrapped in quiet: “Searching for presents quiet,” “Getting caught quiet,” and “Hoping for a snow day quiet.” Irresistibly cute, soft colored pencil illustrations of bunnies, bears, and more paint a magical holiday picture indeed.