Book of the Month

When Stephen Hawking was a little boy, he used to stare up at the stars and wonder about the universe. Although he was never top of the class, his curiosity took him to the best universities in England: Oxford and Cambridge. It also led him to make one of the biggest scientific discoveries of the 20th century: Hawking radiation. This moving book features stylish and quirky illustrations and extra facts at the back , including a biographical timeline with historical photos and a detailed profile of the brilliant physicist's life.
Little People, BIG DREAMS is a bestselling series of books and educational games that explore the lives of outstanding people , from designers and artists to scientists and activists. All of them achieved incredible things, yet each began life as a child with a dream.
This empowering series offers inspiring messages to children of all ages, in a range of formats . The board books are told in simple sentences, perfect for reading aloud to babies and toddlers. The hardback versions present expanded stories for beginning readers. Boxed gift sets allow you to collect a selection of the books by theme. Paper dolls, learning cards, matching games and other fun learning tools provide even more ways to make the lives of these role models accessible to children.

An Academy for magic and special talents. A destiny unfulfilled. A secret legacy.
The first instalment of the international best-selling fantasy series from Jenny Nimmo starring Charlie Bone.
Since his father died, Charlie Bone has lived with his mother and her mother, in the house of his other grandmother, Grandma Bone. Looking at a picture of a couple with a baby and a cat, he suddenly discovers he can hear their voices. Although he tries to hide his new gift, Grandma Bone and her scary sisters soon find out, and send him to Bloor's Academy. Charlie quickly finds life at Bloor's pretty tough, with its strict rules and the malevolent head boy, Manfred, set against him. When Charlie discovers that the child in the photograph is being held, hypnotised, against her will, he and his new friends with 'gifts' try to awaken her. But can they overcome Manfred's sinister hypnotic gifts?


What the Ladybird Heard at the Seaside
by Julia Donaldson
lllustrations by Lydia Monks
Join everyone's favourite crime-busting ladybird on a trip to the seaside! With a cast of wonderful sea creatures, including a magical mermaid, and plenty of beach fun, What the Ladybird Heard at the Seaside is a brilliant rhyming adventure from the bestselling picture book partnership of Julia Donaldson and Lydia Monks.

The clever little ladybird is off on a trip to the seaside, but those two bad men, Hefty Hugh and Lanky Len, are up to their wicked ways again. This time they're planning to steal the mermaid's hair and sell it to a famous star. Luckily, the crime-busting ladybird has a clever plan to stop the thieves . . .

The fourth title in the number one bestselling What the Ladybird Heard series – perfect for young children to read aloud!

Think Gardens!
Wild Your Garden
by The Butterfly Brothers

Introducing Wild Your Garden, a practical guide to rewilding your outdoor space, with advice, inspiration and step-by-step projects brought to you by Gardeners' World and Springwatch guests The Butterfly Brothers.

We all have the potential to make the world a little greener, and Wild Your Garden shows you how to create a garden that can help boost local biodiversity. You don't need specialist knowledge or acres of land.
If you have any outdoor space, you can make a difference to local wildlife, and reduce your carbon footprint, too! So what are you waiting for?
​

Author Huw Richards is a man on a mission. He is passionate about teaching you how to garden and grow your own food. Years of experience and trying different things has taught Huw how to garden with little money (or without a garden) and he shows you how to do the same! Grow Food for Free teaches you how to produce no-cost, low-maintenance fruit and veg - and finding low-cost ways to overcome common gardening worries.

Learn about the space you need and how to prepare it, make your own compost, tackle weeds, pests, and diseases, and how to get hold of your first set of seeds! Discover strategies to expand your garden. Can't afford a raised bed? Try repurposing an old wooden pallet. Don't have money to buy lots of different seeds? Look in your kitchen cupboards for food that you can plant. This home gardening book shows you everything you need to barter, borrow, repurpose, and propagate your way to a bountiful harvest without burdening your bank balance!


Gardening Step by Step
from the Royal Horticultural Society

​Simple steps to growing, planting and reaping rewards from your garden, from the experts at the RHS. Transform your garden with inspiring projects taken from the bestselling "RHS Simple Steps to Success" series. Follow practical tips, checklists, charts and step-by-steps which are easy to do and simple to follow to keep your garden gorgeous all year round. Discover how to plant a small garden, from using colour to container ideas. Learn to grow vegetables in your small garden with tips on choosing a site and delicious planting recipes. There is advice on creating an easy-care garden from formal designs to planting ideas. Plus, get the low-down on easy pruning and find out how to encourage flowering and keep your clematis properly cut back. Get results, whether you're a green-fingered guru or a gardening novice.

Take a look at these wonderful reads!

A Life No One Will Remember. A Story You Will Never Forget.

France, 1714: in a moment of desperation, a young woman makes a Faustian bargain to live forever and is cursed to be forgotten by everyone she meets.
Thus begins the extraordinary life of Addie LaRue, and a dazzling adventure that will play out across centuries and continents, across history and art, as a young woman learns how far she will go to leave her mark on the world.
But everything changes when, after nearly 300 years, Addie stumbles across a young man in a hidden bookstore and he remembers her name. 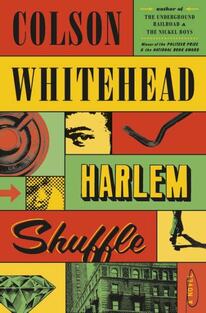 "Ray Carney was only slightly bent when it came to being crooked..." To his customers and neighbors on 125th street, Carney is an upstanding salesman of reasonably priced furniture, making a decent life for himself and his family. He and his wife Elizabeth are expecting their second child, and if her parents on Striver's Row don't approve of him or their cramped apartment across from the subway tracks, it's still home.

Few people know he descends from a line of uptown hoods and crooks, and that his façade of normalcy has more than a few cracks in it. Cracks that are getting bigger all the time.

Cash is tight, especially with all those installment-plan sofas, so if his cousin Freddie occasionally drops off the odd ring or necklace, Ray doesn't ask where it comes from. He knows a discreet jeweler downtown who doesn't ask questions, either.

Then Freddie falls in with a crew who plan to rob the Hotel Theresa—the "Waldorf of Harlem"—and volunteers Ray's services as the fence. The heist doesn't go as planned; they rarely do. Now Ray has a new clientele, one made up of shady cops, vicious local gangsters, two-bit pornographers, and other assorted Harlem lowlifes.

Thus begins the internal tussle between Ray the striver and Ray the crook. As Ray navigates this double life, he begins to see who actually pulls the strings in Harlem. Can Ray avoid getting killed, save his cousin, and grab his share of the big score, all while maintaining his reputation as the go-to source for all your quality home furniture needs?

Harlem Shuffle's ingenious story plays out in a beautifully recreated New York City of the early 1960s. It's a family saga masquerading as a crime novel, a hilarious morality play, a social novel about race and power, and ultimately a love letter to Harlem. But mostly, it's a joy to read, another dazzling novel from the Pulitzer Prize and National Book Award-winning Colson Whitehead.